Waking up at 430 is never an easy thing, regardless of when you went to bed… or so I thought.  That was when we needed to be up to catch the sunrise bus from Aguas Calientes up to Machu Picchu and I have never been so excited to jump out of bed.  We had arrived to town the afternoon before and spent some time exploring, getting massages (so needed!), and finally having a nice group dinner at a restaurant called The Treehouse- where we all toasted to our new friend and travel buddy Katie from England who was celebrating her 24th birthday (not a bad way to start a new year!).

The group dynamic is awesome.  It’s myself, Katie, Peter- a 60 year old awesome guy from Chicago who has decided to get busy living himself, a married couple named Lucy and Daniel- early 30’s from Switzerland, super nice, exploring the world together, and Mateusz (Mathew)- a Polish gent, 29 who currently lives in Dubai.  We’re being led by Dan, 35 from Canada, the dude that started Pulse Tours, really cool, super inspirational, more on him and our developing friendship in a future post.

We’ve all opted to hit the mountain super early hoping to catch the sunrise, and also do a bit of exploring before everyone started to arrive later in the day.  Apparently everyone else had the same idea!  The queue for the busses was enormous (we had a guy holding our place in line for ~$23, kind of a dick move but we were assured that was just how things operated here and it was good money for these guys and their families…).  The bus ride up was windy and bumpy and the mountain had a mist around it that we were hoping would clear up for the sunrise.  At the gate we met our guide Jefet (Jef) who was awesome!

We began to explore this amazing place, we were greeted by some Llamas that live there while Jef gave us the history of Machu Picchu and pointed out all sorts of amazing details.  Unfortunately the mist never fully cleared so we didn’t get the ‘sunrise’ we had hoped for, but the mist added an element of magic to our experience, was almost dream-like, we all agreed that this was exactly what the universe had meant for us…

It’s hard to describe the power and energy at Machu Picchu, it’s unbelievable to think that this was built without any tools or even metal to chisel and shape the rock.  The city was perfectly designed to house 1000 people, provide areas of worship and gathering, withstand earthquakes, and remain hidden to the outside world (the Spanish that conquered the rest of the country never knew about Machu Picchu).  It truly is a work of architectural and spiritual art.  From the Temple of the Sun, whose 2 windows perfectly align with the sun’s location on both the winter and summer solstices casting a perfect beam of light onto the golden discs which used to adorn the walls (think Raiders of the Lost Arc), to the City Square which was designed as a perfect amphitheater, amplifying the voices of the King or Priests to the entire city population that had gathered there without really speaking in much louder than a normal voice, to the Temple of the Condor where the funerals were held in hopes that the sacred condor would transport their spirits to the afterworld, this ancient city is nothing short of amazing.

That is just the city… But anywhere you look is sheer natural beauty!  I’ve never seen anything like this in my life, the pictures won’t do it justice but we were all so taken aback by the wonder of the location.  It just all fits together so perfectly (much like the Incan bricks), our collective breaths were taken away time after time as we continued to walk around looking at the landscape surrounding Machu Picchu.

We finished our tour and bid farewell to Jef, thanking him for such an amazing morning.  Onto part 2 of the day which was the hike of Montañe Machu Picchu (Machu Picchu Mountain).  There are 2 hikes one can do from the city, this one or Huayna Picchu.  Huayna Picchu has another temple at the top of it and is said to be a bit more of a dangerous hike, with many parts of the path being super narrow as well as vertical.  The peak of the montañe is about 1000 feet higher which makes for a longer hike (and we were told it was quite difficult as well) and when you reach the top, you get the view of both Huayna Picchu as well as Machu Picchu so we opted for this trail.

They only let a certain number of travelers on the trails each day and they stagger your start times to minimize the traffic on the trail.  They are super strict about this so if you miss your entrance, you’re pretty much out of luck (and most likely very disappointed!).  Our window was from 9-10 and we joined the line around 9:20 so figured to be in pretty good shape… until we noticed we were missing Peter and Mateusz!  I sent the others ahead while I ran back the trail to try to find them.  They had missed the sign for the mountain and had continued up towards the Incan Road and Sun Gate.  I finally saw them heading back just as I was about to turn around and the three of us headed back to the entrance- though this was NOT a day that was going to require additional exercise!  Looking at the line now as well as the time we knew we’d be cutting it close… as did everyone that had queued up after us.  We met two girls from NYC in line just behind us and started chatting about the experience thus far.  As it was coming up on 10am there were many people trying to push their way up the line- but there was nobody that was going to get past 3 New Yorkers- 5 or 6 tried, none succeeded.  Was a good thing too as the 3 of us and the 2 of them were literally the LAST group to get in!  The universe is indeed good…

The hike was super hard and long- so so so many steps up to the top.  The advice we received was to rest often in the shaded spots and make sure to drink a ton of water.  At an average pace it was supposed to take about 2 hours up and 1 hour down.  This also posed a potential problem as the peak ‘closes’ at noon so we had to hike at a bit more of an aggressive pace if we wanted to spend any quality time at the peak.  So up we went, we all sort of hiked in pairs, trading partners here and there when some needed to rest and others wanted to climb.  My lungs were burning and my legs were on fire!  I can see why this hike takes so long as not only is it physically challenging, the scenery is so breathtaking that you want to stop to appreciate it and take photos all the time.  The view of both Machu and Huayna Picchu keeps changing as you work your way up towards the peak- breathtaking (both literally and figuratively) doesn’t even come close to doing it justice.

As I approached the peak, I had ended up with Mateusz as my hiking partner.  We had hit a good stride and were enjoying some good conversation in between our shortness of breaths.  I decided I needed a little music for the final push so after putting on the beginning of Eye of the Tiger for a moment (those on the trail got a good laugh out of it) I popped in my headphones and put on the playlist Egbert and I have been collaborating on.  It contains a lot of classic rock, inspirational songs and lyrics mostly from the 70s that added an element of friendship as well as inspiration as I approached the peak.  I was wondering what song might come on as I reached the top, would it be Stairway to Heaven?  Perhaps Over the Hills and Far Away? I’d say ‘coincidentally enough’-though I no longer believe in coincidences- the song ‘Wish You Were Here’ by Pink Floyd was the one the universe decided I should listen to as I approached the summit.  As I had been thinking about many of the amazing people in my life during the climb, nothing could have actually been more fitting.  One of my intentions on this voyage and one of the things I always ask for while mediating, in church, or in discussions with my closest friends is to lead an inspirational life- So, to anyone who is reading this: I do truly wish that you make it to this magical, spiritual, amazingly inspirational locations yourself someday… I solemnly promise your life won’t be the same after.

Once we all were atop Montañe Machu Picchu, we shared a group hug, sharing our energy- which though nearly drained on the climb had al of a sudden been refilled to the brim- and took in this moment together, before then all taking a little time to ourselves to take in the moment personally as well, in whatever fashion we so chose.  I sat right on the edge overlooking Machu Picchu and the valley below and meditated for 10 minutes, thinking about the climb I had just made and what it represented for me.  Turning my hands upwards I felt the energy of the sun fill my soul, it was both peaceful and exhilarating at the same time.  Pushing my hands outward I focused on what I wanted to send back out, both to the universe itself as well as to specific people I was thinking about.  To those individuals, I hope you felt my energy and your spirit received my message.  And to everyone out there, I wish you bliss, peace, inspiration and love; and that the magic that I experienced this day finds its way into your life as well, wherever and whenever you need it… 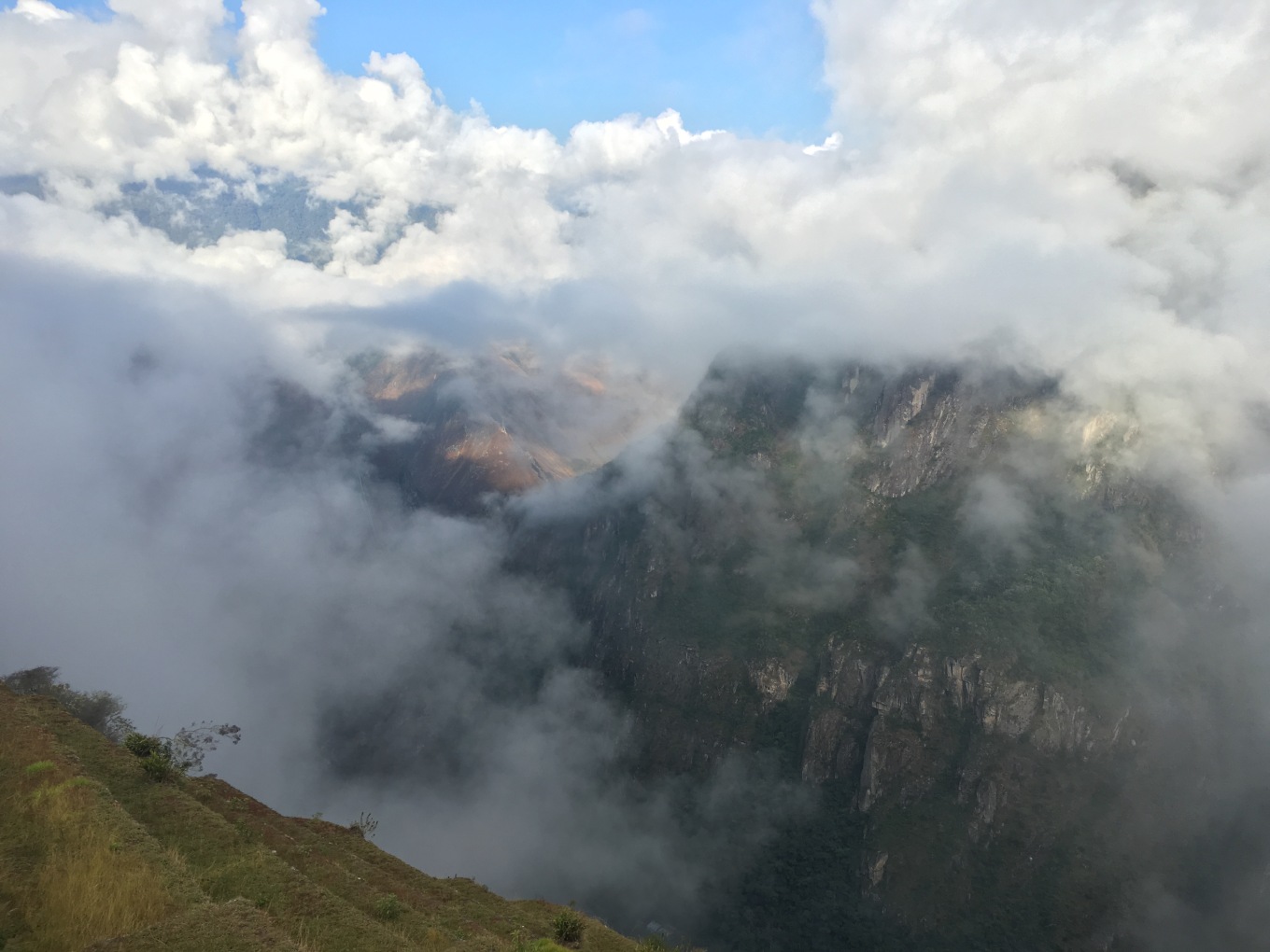 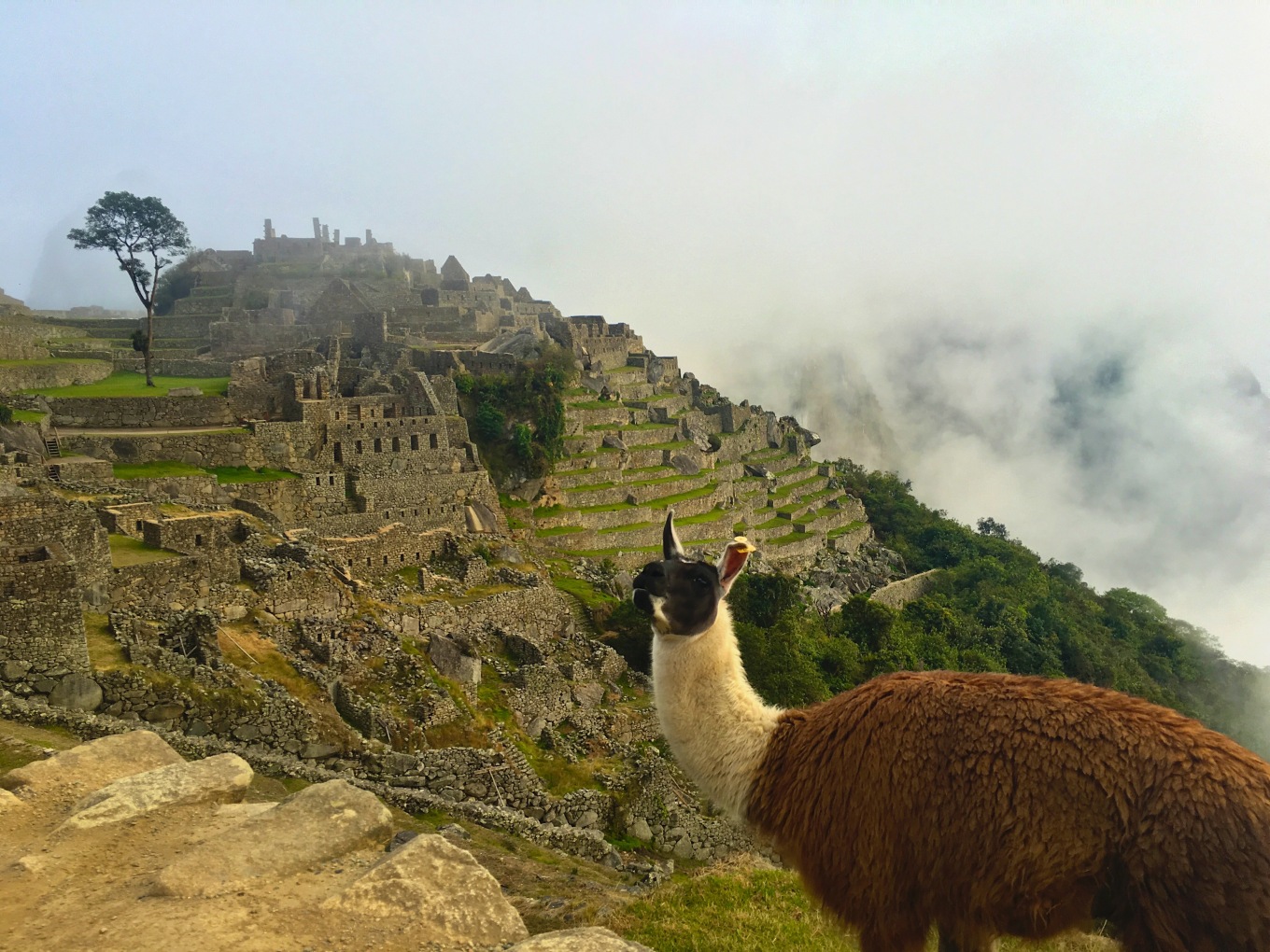 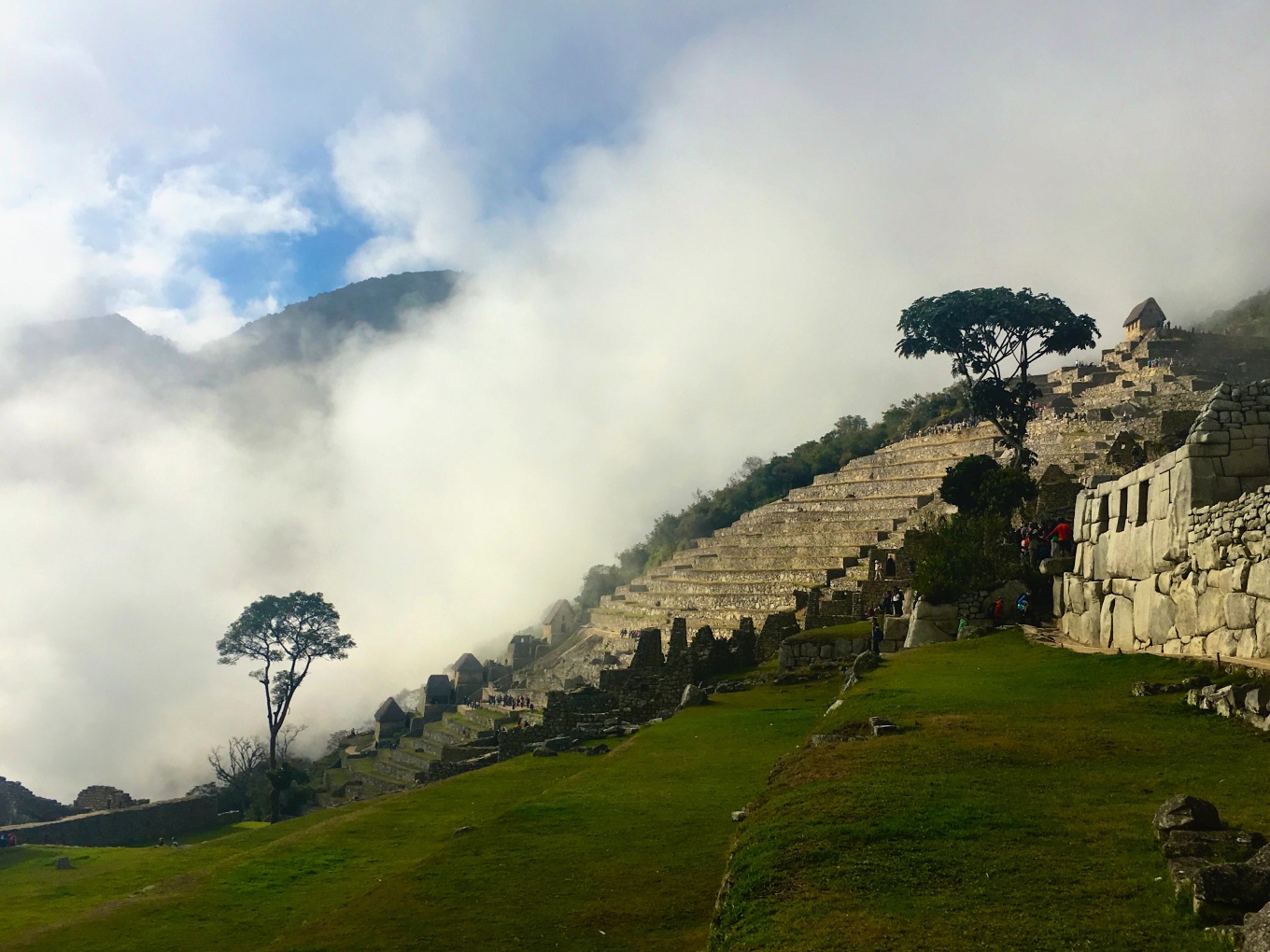 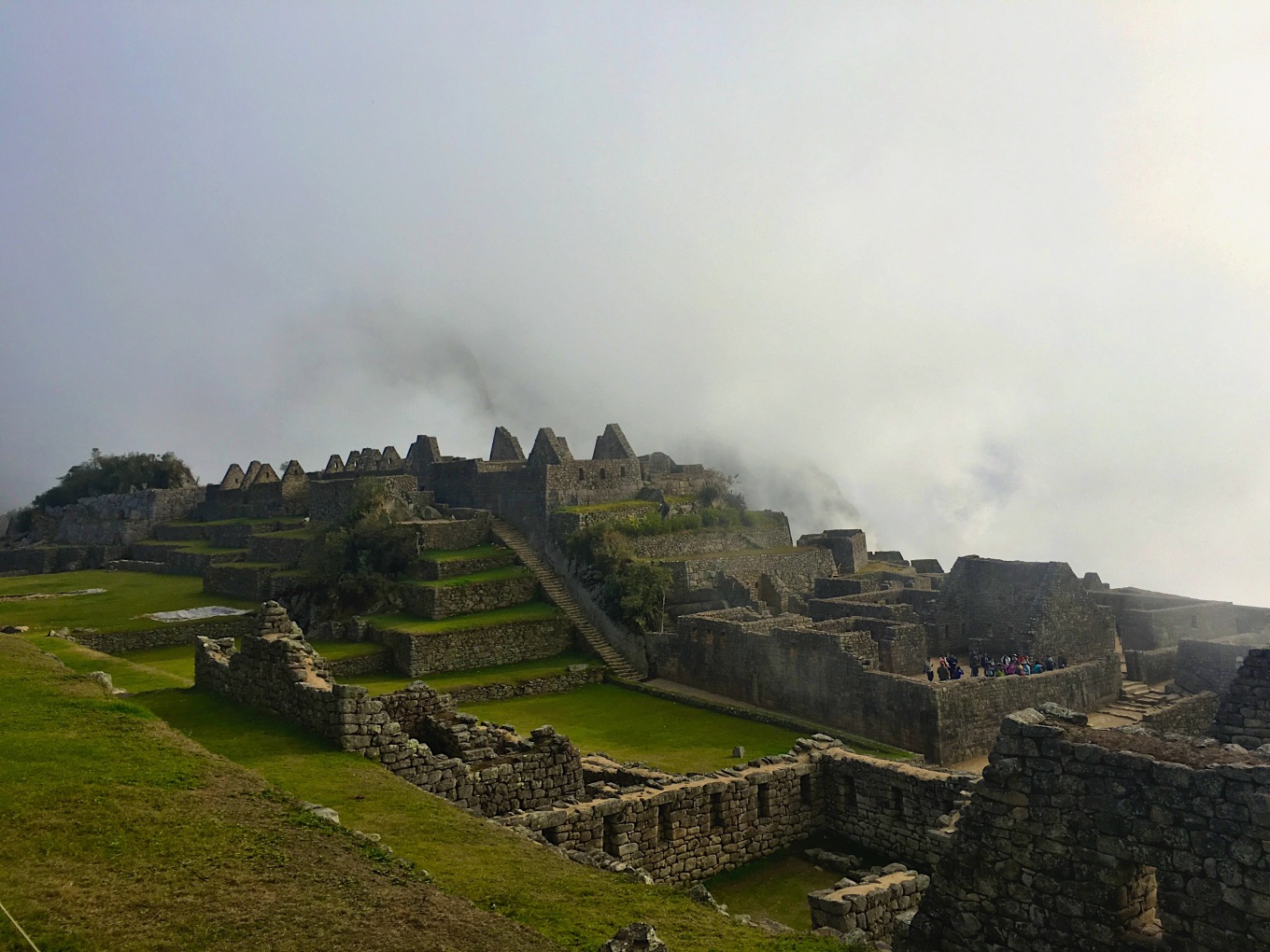 Temple of the Sun with its solstice windows 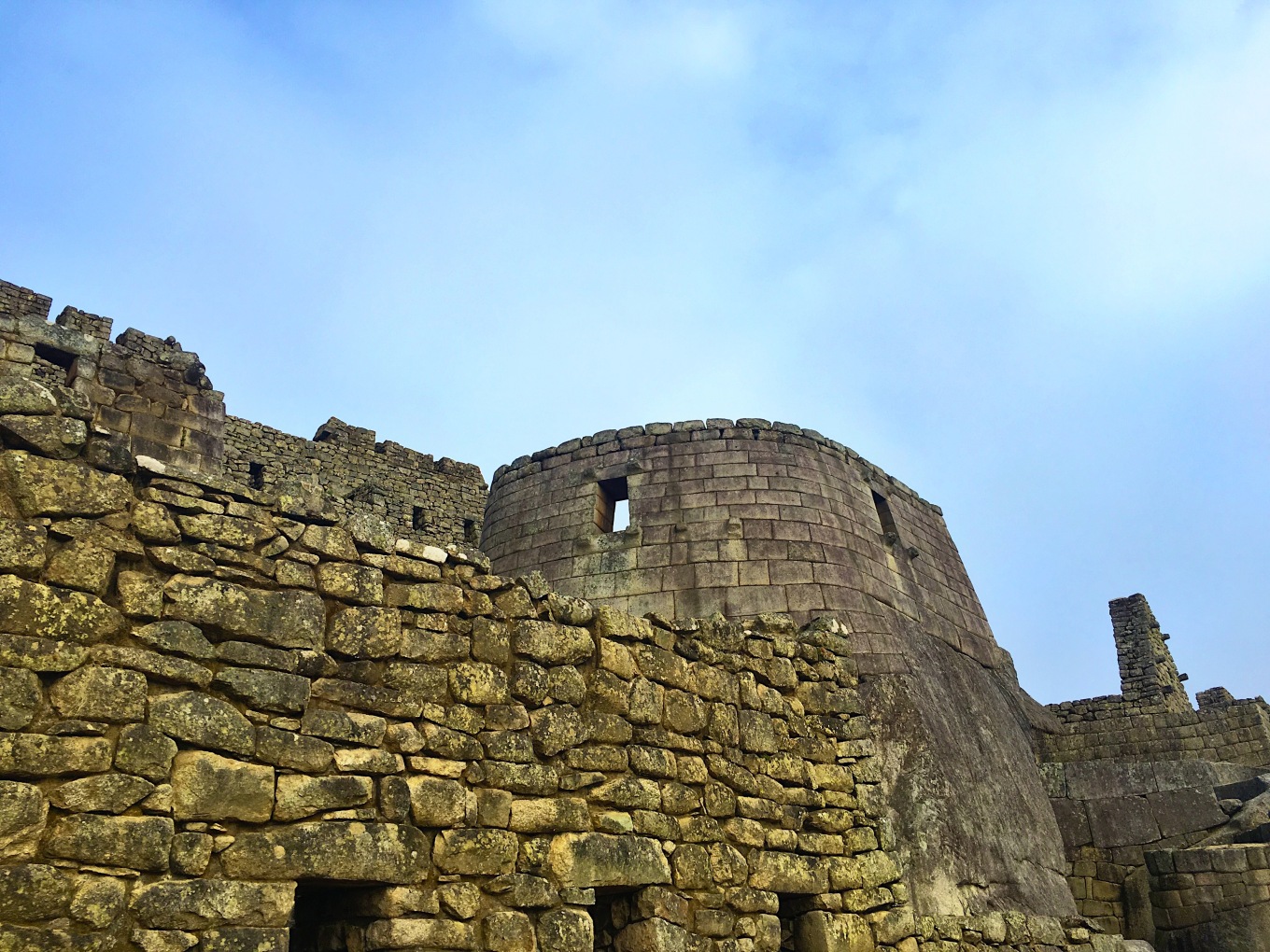 Room with a view, Temple of Three Windows 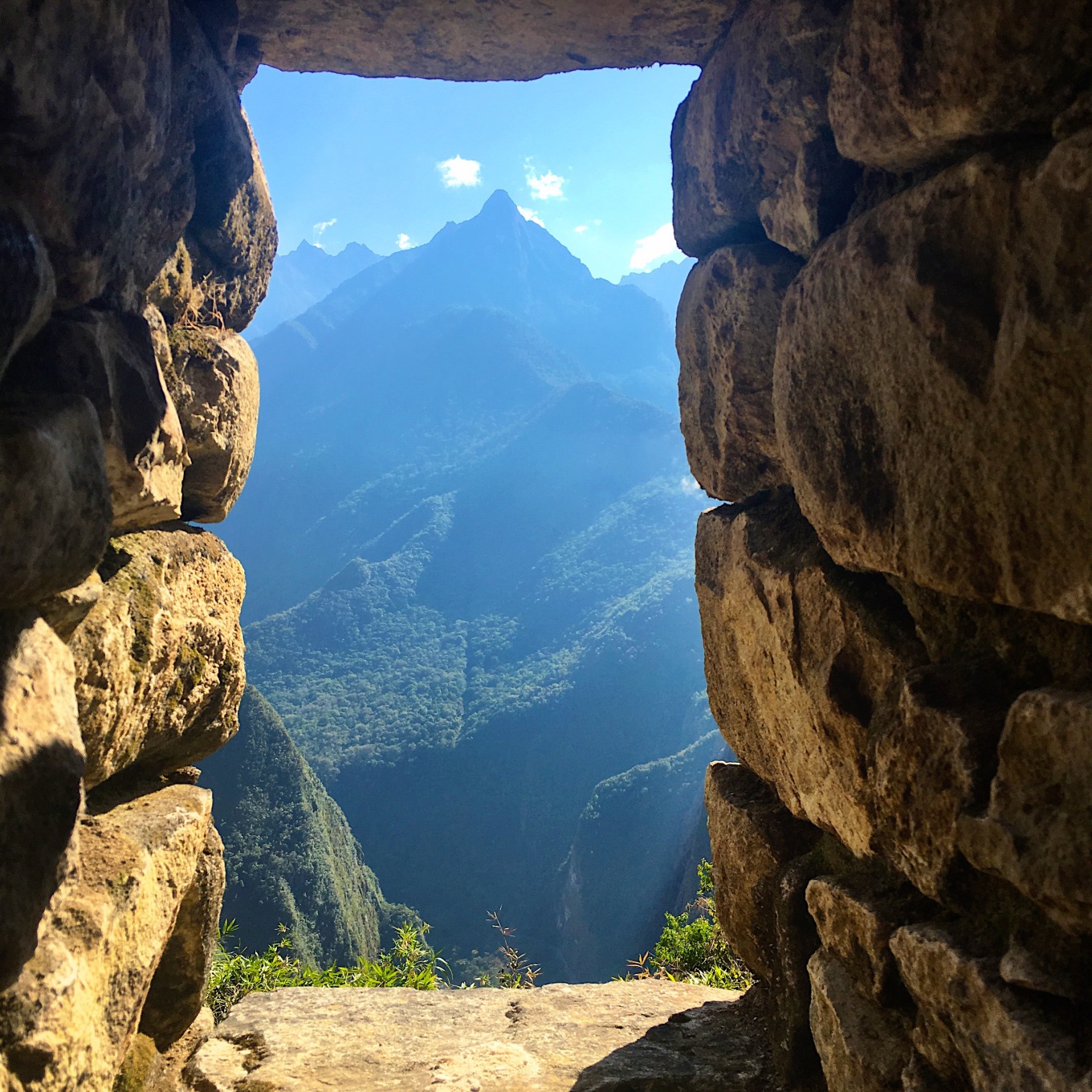 Sun came out, Machu Picchu and the valley

Back side of Machu Picchu

Sheer beauty… About to start the hike!

Filling up with the power of the Sun 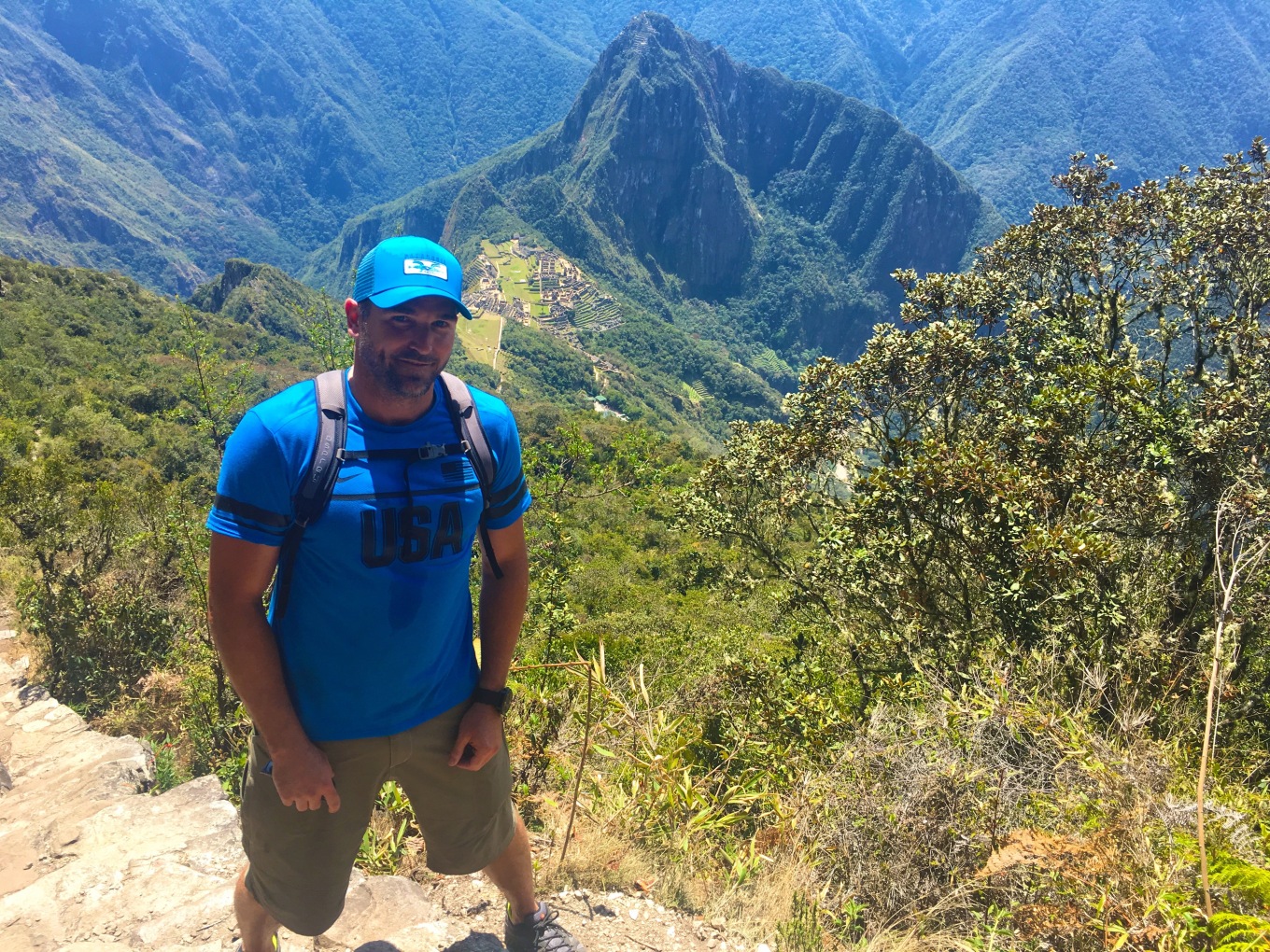 Made it to the top! … Wish you were here.

6 thoughts on “My day at Machu Picchu” Leave a comment ›

Will keep this updated with a rotation of favorite quotes:

“Train yourself to let go of everything you fear to lose...”
- Yoda, Star Wars Episode 3, Revenge of the Sith”